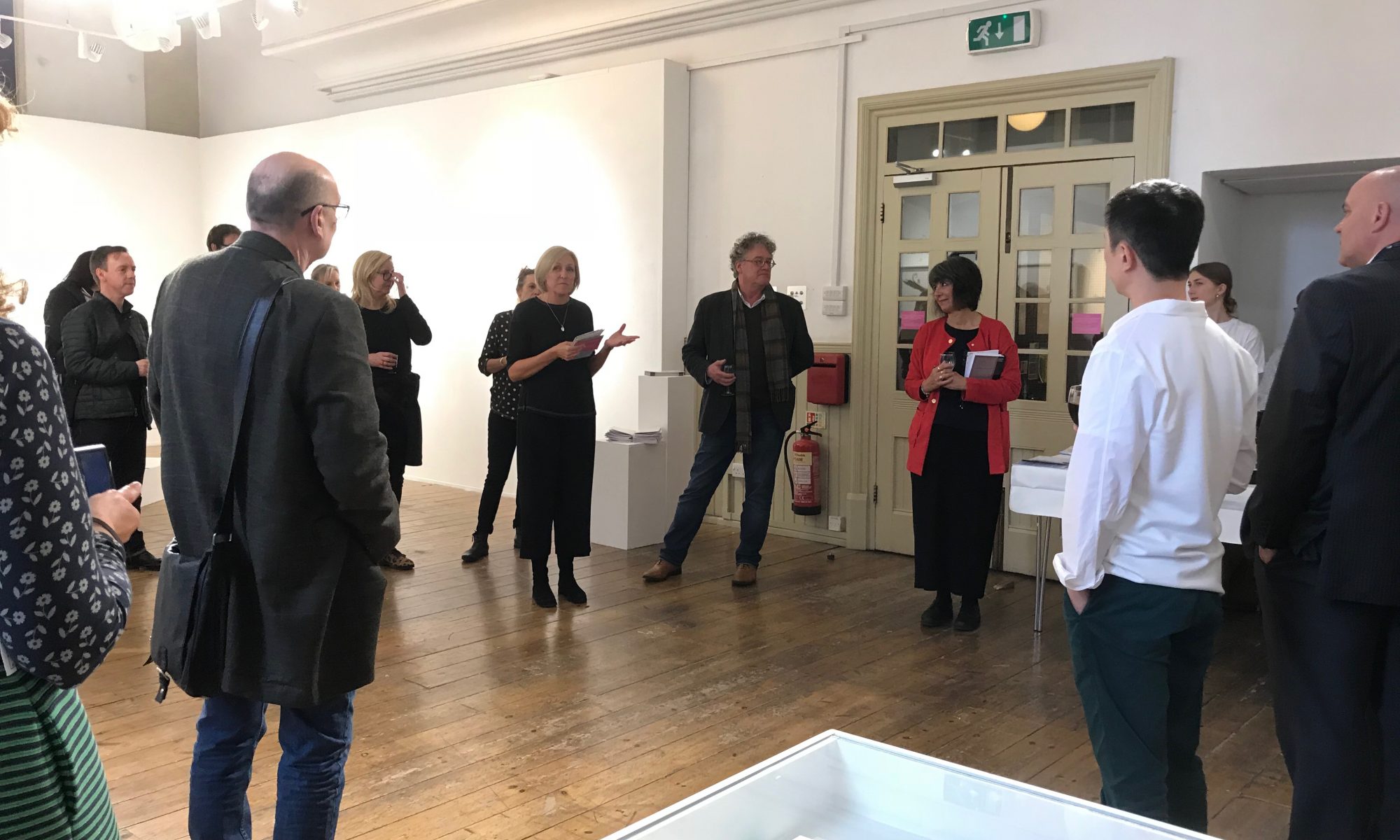 You and I are discontinuous Beings

The exhibition was inspired by the book Collective and Collaborative Drawing in Contemporary Practice.  The Catalogue features an essay by Victoria Mitchell.

Collective and Collaborative Drawing in Contemporary Practice published by Cambridge Scholars.  The book  grew out of papers originally presented at the Drawing Conversations: Collective and Collaborative Drawingsymposium held at Coventry University in December 2015. Whilst both collective and collaborative drawing are being widely explored internationally within and beyond educational institutions, there is surprisingly little serious research published on the topic. The book sets out to address this gap by considering what happens and how, when people draw together either in the form of a collaboration, or through a collective process. It consists of twelve chapters several of which are co-authored, organised under the themes of: conversations through drawing, drawing collaborations and drawing as communities. A core consideration of the book is the capacity of drawing to foster interdisciplinarity and to form a language of interdisciplinary co-operation. In considering ways in which drawing can mediate and facilitate collaborative conversations between people and artefacts or collections, chapter authors ask questions about the role of collaborative drawing in exploring and capturing social histories within public engagement projects and the expanding opportunities for collective narratives, pointing to the need for further debates, research and scholarship, in relation to collaborative drawing.

Copies of the book are available from:

The Catalogue is here: YaIaDB

Dancing as if Dancing Together by Victoria Mitchell

In Search of Common Ground

Drawing – or the form-and-formation of visual imagery for which the word ‘drawing’ is the most appropriate term – is a medium through which labyrinthine layers of experience are articulated and transmitted, often with great simplicity. For artists, drawing is also a ‘practice’, a word rooted in performative action which has developed critical overtones even as it seeks to distance itself from theoria. Where drawing as performative action meets drawing as collaborative inter-action an opening is beginning to appear, from which thoughts are being drawn and re-drawn, materially and critically. As yet, and as it should be, these emerge as a sketch of possibilities and a tracing of movements which have no end and therefore cannot be contained.

But there has to be a starting point. In defining the kinetic (active, performative) basis of drawing, Philip Rawson described a fundamental designation of the act of drawing as ‘a point that moves’; whether it is a fine silver point or a wad of cloth is less significant than that the point-carrying, mark-making tool acts ‘as some kind of surrogate for the hand with its fingers’.2 Surrogacy – here the point standing in for the hand – is typically associated with substitution, but it is more than that. Behind its meaning as substitute lies an etymological link to notions of asking and of stretching out (the hand). Rawson’s hand-tool-mark-making connection is thus not unrelated to the pointing which functions as gesture, that distinctive and distinguishing ‘pointing out’ trait that few animals other than humans possess. In our inter-activity it might also be a stretching out as an invitation to receive a gesture in return.

As infants we point before we speak, usually within the first year of life, and later we create cognition-related connections between pointing and language acquisition. When we point something out, perhaps indicating with the index finger, it is usually to draw attention to a site or sight to be shared or to communicate a circumstance or phenomenon. Pointing often invites response, as a reaching-out invitation to share or transmit a (spatial, directional) reference and an expression of something awakened in the mind that can also be awakened in the mind of another person. For Paul Klee, in taking a line for a walk, ‘the mobility agent is a point, shifting its position forward’.3 Perhaps too, this line might be asking others to join in, as if preparing the ground for a relationship to be formed.

Whether open ground, empty space, table-top or untouched paper, each and all brim with potential for that which is not yet known or for that which is yet to appear. In such contexts, the page or ground of a drawing might be considered in parallel to a stage, where the blank page as an empty stage is a surface or a platform (a plateau, a flat form) with which to engage and on which to inter-act or act out, as if ‘drawing out’ that which is hidden from view. On the stage as page we can envisage an assemblage of individuals who move and

exchange movements with each other, shaping forms in and out of spaces that open are shared. On the page as stage the traces of such inter-active movements remain, as if drawing out through dialogue the intervals between participants.

On this empty ground we do not yet know what will emerge or who will witness the encounters to be drawn out of that which is yet to materialize. The ground of participation, of a shared becoming, is yet to unfold. We do not arrive empty handed, as each brings the heavy baggage of past experience. Our hands, as also our perceptions, are impregnated with memories. It is the ‘we’ that will be shaped by the event of encounter, not unlike a group of dancers who, working together, enact movements in response to one another, testing out through trial and error how such responses might or might not become a performance or be viewed by an audience. Drawing lacks an elegant word to parallel ‘dancers’ here – drawers are more likely to call up an image of bedroom furniture than material-handling image-makers – but to liken dancers to those that engage in drawing (together) may not be entirely far-fetched. Both are arts which typically draw on proprioceptive movement and in which lines of force or threads of energy are secreted through gestures. Sensory experience is drawn forth from the body in its becoming, and concepts are released through the shapes of movement. Where signals from others prompt refrain and response, the social erupts.4 Drawing is performative and also a performance.

In her essay ‘Walkaround Time: Dance and Drawing in the Twentieth Century’ Cornelia H. Butler gives a detailed account of interaction between drawing, dance and performance, describing it as ‘one of the great discourses of the last century’.5 But although many visual artists reference drawing in relation to dance they are almost entirely independent artist-practitioners, for whom the resulting dialogue does not extend beyond the contained field of fine art. Whereas the familiarity of dancing as collaborative endeavour is widely attested (especially in contemporary dance but also in traditional ‘folk’ contexts), for drawing which is more often

associated with individual practice, the space of mutual enactment awaits to emerge as typical of the field. Discourse between artists (whether performative or visual) is of course a vital aspect of all practice, but even where this discourse develops into collaborative dialogue there is a tendency for it to be activated within a discipline that is named and contained as ‘Art’. An expanded territory in which drawing emerges as a social process is yet to unfold as fully as it might. Collective and Collaborative Drawing in Contemporary Practice is exceptional rather than typical in its focus of participation, but it is also timely, spot-on mark-making on the ground-map of an ethically-attuned notion of practice.6 ‘Collective’ denotes a gathering together; when combined with the ‘working with one another’ of collaboration, a network (net-work) of practices, attached to but not limited by traditional notions of practice, becomes possible.

As Henri Lefebvre attested, there is an ethical dimension to the topos of shared actions, especially as a reflection of democratic potential.7 The open weave of working together can stimulate and encourage an arena in which everyone can be an artist and the aesthetic emerges as conditional rather than ‘centre stage’. A focus on the co-operative ‘work’ of art rather than ‘works of art’ enables activation of a broader, but no less aesthetic or productive, socially-choreographed arena within which drawing can be re-figured and renewed. If there is to be a work of Art (as when a group collaborates and concurs with such an outcome) it will be accountable in terms of the (socially-determined) organism of its making rather than a predetermined hierarchical context.

We are familiar with ‘social space’ and ‘social sculpture’, in both of which the non-verbal and performative can be conceived as being acted out in union – physically, materially and aesthetically. Speaking of dance, Andrew Hewitt employs the related notion of ‘social choreography’ to denote a space for the performative ‘in which social possibilities are both rehearsed and performed’.8 Movement and drawing intertwine through choreo-graphy. In antiquity, the Greek khoros, from which ‘choreo’ takes root, referred to the open

ground or floor on which dancing took place (and from which the collective grouping of the chorus grew). The graphein of choreography, also from the Greek, is commonly associated with writing but has earlier origins in reference to drawing. For drawing, the shared ground (of the blank page, for example) becomes the khoros upon which the marks traced by our co-operative inter-activity can begin to gather together. Now diverging, now converging, social space becomes ‘a leaving of traces upon it’ and in so doing acquires symbolic value.9 Drawing, as a field of socially-sensitive and quasi-performative practice, might, as in the context of this exhibition, aspire to social choreography in Hewitt’s sense. As the social subsumes the subjective, the ground of our becoming is ever more choreographic in register. Drawing on Jean-Luc Nancy, Jenn Joy suggests that community must be re-choreographed, creating a ‘spatial join’ that has the potential to unite that which is otherwise fragmented both within the self and in our separateness as individuals.10

Marking Out a Dialogue of Difference

To paraphrase Roland Barthes, a drawing is made of multiple marks. In the context of his reflections of text as ‘made of multiple writings’, a tissue of strands ‘drawn from many cultures’ enters ‘into mutual relations of dialogue, parody, contestation’.11 But rather than the clear demarcation between the ‘death of the author’ and the ‘birth of the reader’, which his seminal argument wisely exposes to reflection, those mutual relations of dialogue may harbour a less binary position for those who choose to make drawings together, as in the form of a conversation or social production. In conversation, participants (there are always more than one) engage in listening and speaking, as if both author and reader are intermingled within and between each voice and ear.12 In drawing together we enter into a dialogue of marks and mark-making, with each and all of us ‘drawing’ from many cultures. Intrinsically dialogic in disposition, no-one amongst us is an island.

As well as embedded as a node within the constellatory mesh

of cultural circumstance, participants who draw together in order to draw together are interwoven through the nature of marks and their formation. They are embedded in a shaping of relationships that are not only culturally determined but are also attuned to the material and physical complexities of being in the world at large. As the critical advocacy of ‘new materialism’ convincingly demonstrates, human actions and non-human agents of matter are interconnected through ‘distributed agency’. Our bodies ‘are kin in the sense of inextricably enmeshed in a dense network of relations’.13

It is from the constant alternation and shuffling between separation and connection or self and others that drawings grow and are received. There is a sense here of a moving drawing, a drawing on the move, a mobilizing of the means through which the indeterminate, through codes, ciphers, traces and trails of activities and operations can release, albeit in virtual form, something approaching a reflection of the real.