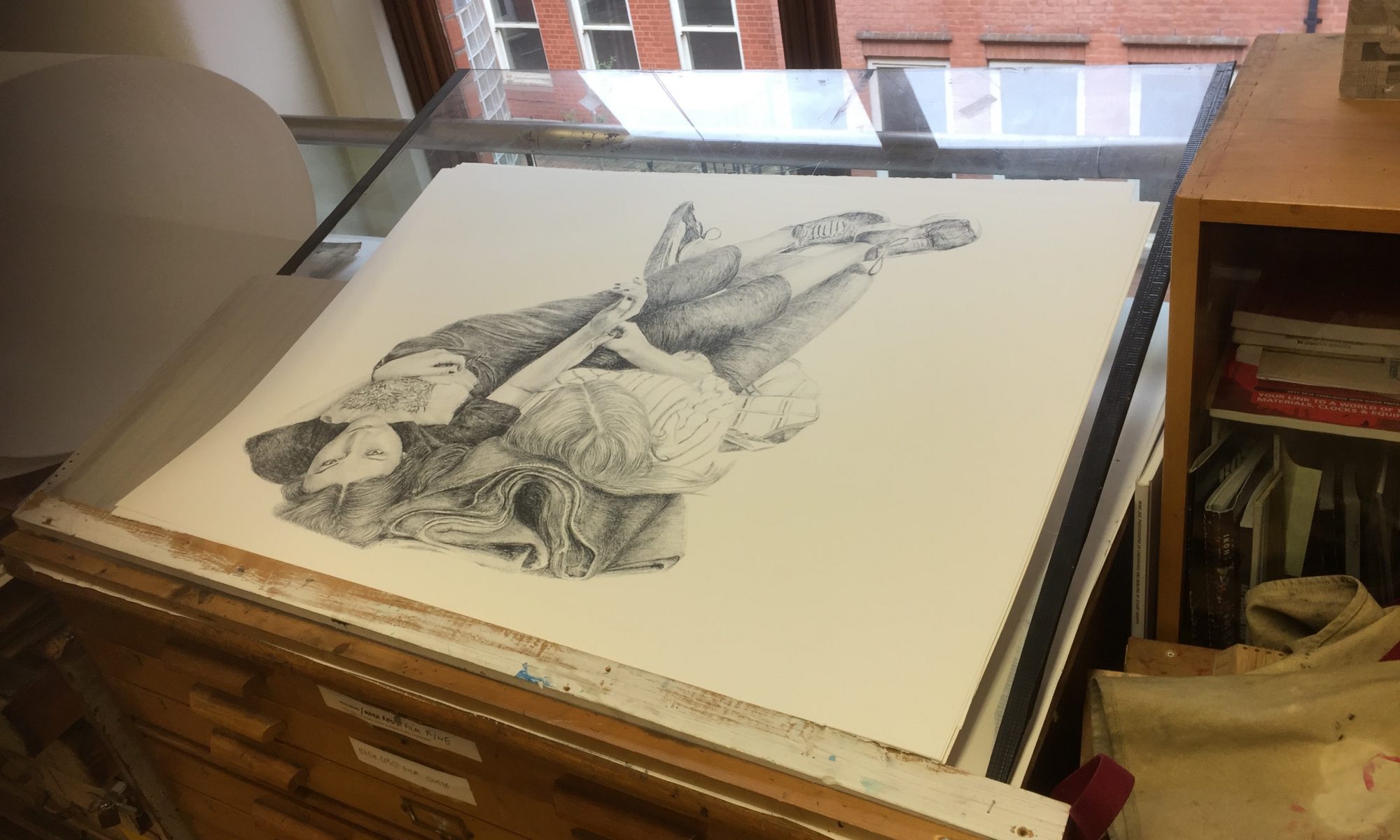 Following the successful Z133 emulsion test with 180 fine screen mesh I performed a second Z133 test, but with 165 screen mesh and a new image drawn on paperchase ‘frost’ film. ‘Katie B and Cousin Bea’.

The Frost film has a different texture (tooth) and is much thicker than mark resist.  The detail of the drawing is held well on the film and I was hoping that the new found fine detail Z133 emulsion would provide the means to retain the flowing graphite mark and enable a fine detail print on high quality paper.

The screen was coated on both sides and exposed for 6 light units and printed.  The resultant print, below, was clearly well under exposed for this drawing and the frost film. The background and highlights had not been retained and the ink had not been prevented from breaking through. You live and learn.

This under exposure could have occurred as the frost film was much heavier than the mark resist film used for similar drawings.  With this in mind and reviewing the balance of detail in the shadows of the 6 light unit print  an educated guess was made to increase the exposure to 10 light units

The educated guess had proved a good one as the image was full of information right across the tonal range.  In particular the detail held in the highlight area of the main subject’s face was very delicate.

Printing on Canaletto ( smooth cotton and white) and Fabrianno Rosapina ( rag and textured) provided a comparison between the rough and smooth paper image. The final decision on which paper to edition the print is a subjective one. Further paper tests are to be undertaken to provide a range of future choices in relation to future images.

Comparing the drawing on film at the beginning of the process and the final printed detail provides a gratifying result – they are not the same but the final print has a beautiful quality that is close to the original drawing, but has the benefit of being an image that can be reproduced.

Whereas the valuable writings of Walter Benjamin in the mid 1930’s posited that the reproduction of art removes the ‘aura’ of the original work, I suggest that this work, originating in the mass digital photographic domain as a smart phone image, through hand drawn analogue interpretation into a reproduced artistic limited edition print benefits from the digital ‘non aura’ origination through artistic ‘aura rich’ interpretation to the final ‘mix’ that enjoys the artistic image and simultaneously questions from ‘whence it came’. There is much more to discuss in this context.

The original Katie B and Cousin Bea image is from an annual garden party where people of many generations meet every year in an Ironbridge garden hosted by Carola Adams and Graham Peet.  Katie Bannister one of the ‘next generation’ enjoyed her time with her cousin as she contemplated her acceptance by the Courtauld Institute.

The final contribution to this research. Click for : Three Portraits